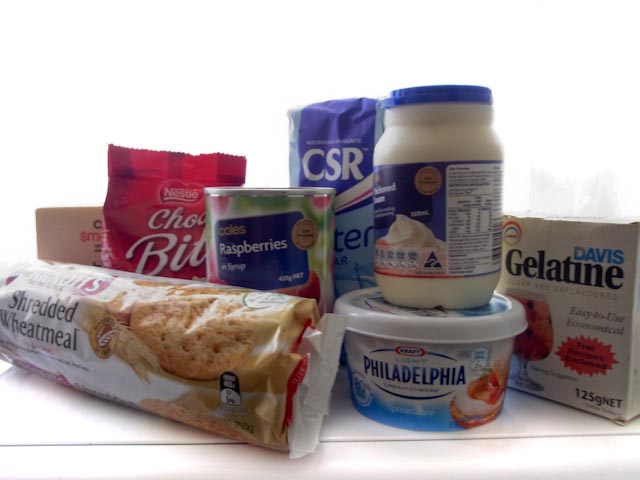 Well, you can tell I’m on holidays – two posts in ‘virtually’ one day…

A fair portion of yesterday was spent in the kitchen cooking up another epic batch of fudge (see here) and also the Dessert of Amazing for lunch today.  I need to write the Dessert of Amazing**’s recipe down so I don’t lose it given the current state of the recipe (below)… yes, very well used… While I’m writing it down I shall also share it with you… with pictures. Because I’m generous like that…

1-2tbs Gelatine – (I used 2 – and I was ever so hopeful that gelatine doesn’t go off… lost count of how long since I’d used it and the supermarket was all out.. seems like I’m not the only one setting stuff this Christmas.)

So, I couldn’t be doing with leftover bits of stuff I wouldn’t use later (cream, chocolate) – so I put in whole packets… I figured they were close enough… (proof positive I should in no circumstances be left in charge of experiments requiring critical measuring…)

1. Melt the Butter and Crumb the biscuits.  In my younger days I’d have been given a rolling pin and the biscuits in a sturdy plastic bag or three and sent out to the front porch to beat the crap out of them… these days I’m allowed to use appliances…  it’s up to you, either way will work though an appliance will make finer crumbs.

Combine the butter and crumbs and press into the base of a springform tin.  You can see the lip of the removable base in the photo below, I’m careful to keep the crumbs below this line so things don’t get stuck when you take the tin apart revealing (hopefully) the true extent of the Amazing.  Then pop it in the fridge.

Pour the gelatine onto 1/3c of hot water (not boiling – hot out of the tap is fine) and stir to dissolve.

Pour half the gelatine mixture into the canned fruit, stir and place in the fridge to begin cooling/setting.

Then comes the fun part… beat up the cream cheese with the caster sugar so it’s light and smooth.

Beat up the Cheese and Sugar, in a separate bowl whip the cream – I whip it until it’s thick but not peaky so you don’t over beat it when you combine it with the other ingredients..

Then melt the chocolate… I use the microwave… but you have to keep an eagle eye on it… this was on high for 55sec with a stirring at about 30s.

Then combine, the cheese, chocolate, cream and remaining gelatine mixture (see, you thought I’d forgot about that didn’t you!) and beat thoroughly –

Swirl the cooled/semi-set fruit into the cheese mixture and then pour onto the biscuit base. I noticed (and you will from the pix) that the Raspberries caused the cheese mix (the cream, no doubt)  to curdle a tiny bit… it doesn’t appear to have affected the final cake, and I can assure that it tastes fine.  I can’t remember if the boysenberries did the same last time I made it..

There you have it, I shall report on its reception at BFF’s house and post pix of the decanted masterpiece when that is done…

In the meantime, consider this my Christmas gift to You and I hope you and your families have a wonderful day, wherever you are and whenever Christmas gets to you!

** Officially a Boysenberry (or Raspberry) and White Chocolate Cheesecake