I’m surprised as you are… I exercised 5 days of the last week.  Three I can usually accommodate, and those usually at the gym. But last week I was struck by a completely random thought that sounded rather a lot like “I feel like going for a run”.

I know, I’m as surprised as you are.  Me. Running. I who had never made the connection in my head that people who do it actually like it.  It isn’t just a means to a ‘smaller’ end.

So, I went with the thought, and as is often the case, tweeted it.

and again… when the urge struck a 2nd time…

So it would appear to me that this business of expending more energy has put me in a state of having more energy to burn, to the point I actually can talk my way through the bullshit above – and so, after a day welded to a chair at the office looking at a screen, coming home and just laxing out on the sofa doesn’t sit well [see what I did there??].

This running thing is part of a change in my routine in that I now exercise on the way home from work, or as soon as I get home from work. Until now, I had got out of the house and exercised before the day really started.  Turning that on its head has been surprisingly great. I’m even working out harder at the gym that I do in my half awake state – and I’m spending less money getting coffee on the way home from the gym.

Now I just have to make peace with the fact that at my gym visit on the way home from the office on Wednesday will actually incorporate Zumba with my Curves workout.

The gods laughter at my expense is now complete. It is a well documented fact (and if it isn’t it should be) that I hate shopping.

I avoid the mall at most costs, unless there is a new season of Criminal Minds out on DVD or if, for whatever reason I have to go shopping for clothes (let’s face it, it’s usually because I have to replace items that are worn beyond threadbare). On those occasions I go to the shops full of sick dread and embarrassment.

Because. Nothing. Ever. Fits.

Or that which does looks dreadful.

So, as a rule, I come away from the shops thinking I’m the size of a barn (rather than a small toolshed outhouse) and feeling as though I am destined to go through life wearing nothing but jeans and t-shirts. Shopping, see? No fun.

However, my dear friend Bliss could make shopping an Olympic Sport, and it so happened she and I were both free on Monday and in Melbourne (the shopping capital of Australia) and so she and I went to the mall, with a view to kitting me out with a winter wardrobe.

And I didn’t hate it.

I didn’t hate it because we started the shopping with this. The Body Shape Bible: Forget Your Size Discover Your Shape Transform Yourself.

It had been a revolution to Bliss, turning her into one of the better dressed people in my world. She was all sorts of keen to work its magic on me!

I was Bliss’ very own personal (very curvy) Barbie Doll – and, as it happened, the same shape as she is – an Hourglass. So, for a few hours we shopped until my credit card groaned under the weight of it… but for the first time in my life I stood in front of the mirror and wasn’t horrified. I put on clothes I would never have chosen for myself (pencil skirt???!!) and they looked amazing. Really amazing.

We even shopped in stores I would never consider, because I was sure their clothes would all be too small. But I walked out of Country Road with 3 long sleeved t-shirts (deep scooped neck) and two jumpers (sweaters) and one of them is long and fitted and GORGEOUS.

Me. In Country Road! 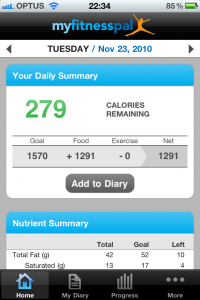 I knew it would come eventually once the exercise thing was ingrained in my schedule (well, mostly… it has been established that days on which you put your back out can have a negative effect on regular attendance) – but the switch in my head was flipped and I can’t even tell you how it happened. Oh, wait… yes I can.

The switch was an unimpressive weigh in at the gym; one on which the needle went up, not down.

This was a displeasure. This was also not [ahem] for reasons of the ‘moon’ as it were… this was a reasonably clear case of diet outpacing the exercise.

I duly did some research on the web about various programs… Lite ‘n Easy was top of the list after a couple of friends had found it quite successful – it’s a program where your food for the week is delivered in insulated boxes and you don’t have to lift a finger to cook – (I think you can probably pay extra for someone to come feed it to you as well…). This has its appeal in taking out the guess work… but it isn’t cheap and I actually quite like half an hour in the kitchen at the end of the day… so I discounted it.

I did also have a bit of a think about Weight Watchers and Jenny Craig but didn’t even get so far as to check out their websites. I’ve done WW before, I know the drill. I also put on all the weight I lost on it and then some… so it was a heck of a short term investment I wasn’t keen to try again…

So, maybe against all good sense, I decided to D.I.Y this diet caper and what better place to start than my iPhone.

I know, right? Isn’t that JUST the kind of thing I’d do?

I researched apps for weight loss and the highest rated one also happens to be [yay!] free – so I downloaded it and started putting it through its paces… if you want to have a look, you can find it on the web here – http://www.myfitnesspal.com/mobile.

Basically, it’s a calorie counter app. You set it up with your profile, your starting weight, your goal weight and the amount of weight you’d like to reduce by each week and the app advises a calorie limit for each day to get you toward achieving that goal. Then, meal by meal you input what you’ve eaten and the application keeps a running total of calories consumed and calories remaining for the day. Where a particular brand product may not be in the database I can input the nutritional information provided on product and when the app syncs that data becomes available for other users!

I use two other applications on my phone to help this business along. One is A2Z Conversions which is useful for converting oz to grams and vice versa (the MFP site is ‘merican so sometimes that data’s not available in metric measures), the other is LiteTest’s Calorie Converter 1.0 which calculates back and forth between calories and kilojoules, again MFP measures calories and a lot of the nutritional info is measured in kilojoules here in Australia.

There’s a whole bunch of social tools on the MFP website so all the benefits of something like WW where you have ‘group sessions’ to learn tips and tricks to help you along, and Jenny where you have your own weight loss coach are taken on by the social network of other people in the same boat… from the comfort of your own sofa… how. cool. is. that???

I know, I know, right now probably half or more of you are rolling your eyes and thinking “how tedious” or going that step further to “Dee’s always seemed a bit off her head, now we have proof”. I on the other hand love databases and keeping track and planning around how many calories I have left of a day… I love the idea of the social network/forum/community idea of the website though I’ve not jumped in and ‘friended’ anyone yet – and well, yes, maybe I’m weird… but hey… it’s working.

I jumped on the scales at the gym yesterday and since that last ill fated weigh in I’ve lost 1.5 kilos; bringing the total lost so far to 6.5 (that’s 1.024 stones, for my British readers and 14.330lb for you ‘mericans).

Do not fear Gentle Reader that this is about to turn into a weight-loss blog, I’ve a couple of posts in mind on the issue, and so I’ll get them out and post occasional updates but as there’ll no doubt be something else on my mind this week, please bear with me until then!!

As I mentioned yesterday, I joined the gym.

Previously to moving to Australia (almost 12 years ago) I had been a regular member at a regular gym, one that ran classes. weights and circuits, weight training, personal training etc. and I won’t lie, I actually enjoyed it. I even got fit enough to enjoy running at one point… I know, me, running… We had a contra deal at the office so it didn’t cost me a cent but my tenure there ended when I moved house, my routine changed and rather than make it work from the new address and the new routine; I got out of the habit.

There are three gyms in my current neighbourhood. A fancy nancy big chain gym where you pay over the odds and get a backpack and drink bottle and where getting out of your contract, for whatever reason, is like getting a divorce.

The second which is all about one on one personal training which is a bit too, well… personal for me.

Which left the other one… and happily, that one suits me down to the ground, because, for me, going to the gym has to be a couple of things.

It has to be near enough to home that I don’t have to get dressed and ready for work there… so, given that I live about 7 mins walk from the shops, and by extension, the gym, this was favourable.

The second criteria is that the gym has to be unpretentious – I’m not really sure I care whether a gym caters for men and women, or women only, but I’m not a big fan of the competitive atmospheres you find in some places. It happens that my gym is women only, and unpretentious in that it’s not done up real fancy, it’s small, the trainers are normal everyday girls, not sticks and the members are friendly. In fact, in reading on their website that the gym‘s unofficial motto is “no makeup, no men, and no mirrors” you’ll get an idea of the vibe of the place.

Finally it had to be able to work into my schedule – I don’t mind getting up early in the morning, but I have to be able to get to there, work out, get home and get ready for work and be on the bus by 8.45 so it had to be efficient… If I get a walk in in the morning my circuit takes about an hour – I can’t sustain that kind of time commitment every day – but the Curves workout is only 30min long (plus 10min of stretches). Now THAT’S efficient, and for me, that’s sustainable.