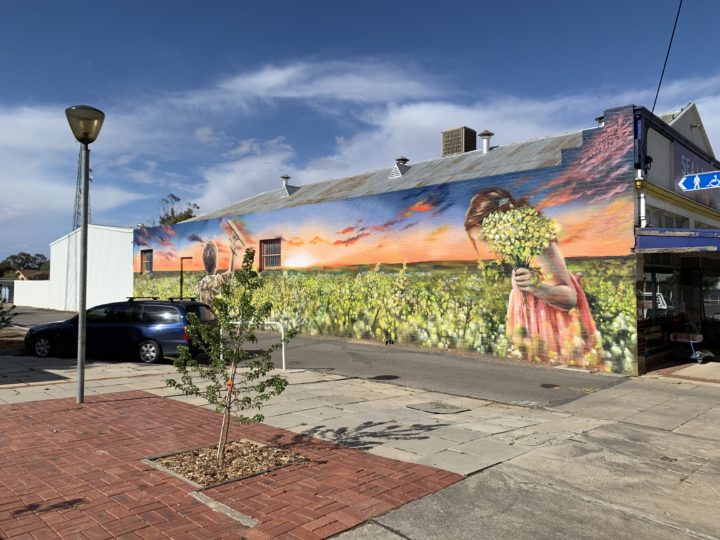 In the not so distant past I was reviewing my phone photo archive and it occurred to me that I was seeing too many pictures of food, the wee car, and the cat. It was late in the year, I was feeling like I’d been stuck in a rut. So I let the little thought I had in my head turn into a plan to take Lucie Mabel to the Minis at the Mill car show at the National Motor Museum and come home by the Silo Arts Trail in Western Victoria something I’d wanted to see in a long time.

This was my itinerary

On the road out of Horsham I had a bonus stop at Pink Lake, which, as its name suggests… is pink. The hue is due to bacteria in the water and which changes according to rainfall. What you can’t see from these pics is the state of my jeans from the tumble I took down the muddy embankment to get these pics… you’re welcome.

A bonus of having a car show in the grounds of a car museum is free entry to said museum. Worth a look round if you’re touring the Adelaide Hills! I particularly loved the Kew Garage story about Alice Anderson, the first woman to open and run her own garage in Australia.

Minis at the Mill

So many Minis, old and new all in one place makes for aisles of smiles and it was worth the drive over to see so many in one place.

The silo arts trail is Australia’s largest outdoor art gallery. The canvases are unused grain silos that have become the backdrop for the regeneration of some of Western Victoria’s small towns’ economies. The first canvas, the silos at Brim, painted by Guido van Helten have effectively kicked off a movement of silo painting in numerous Australian regions.

The western Victorian trail has 8 silos, I started at the top, Patchewollock, went from there to Lascelles, then Sea Lake, stayed in Sea Lake overnight, and picked up the remaining 5 on the final day of the trip on the way home.

I wasn’t planning for it, and didn’t expect it but the drive to Birdwood went via Coonalpyn and I passed by (and of course had to stop) at this beautiful mural. Contrary to the other silos, this one is actually still in use!

Finally, again on the way into Birdwood I followed a tourist sign that pointed to an historic Railway station… it was at Serviceton, and it was worth the stop, not the least of reasons being I managed to catch the Overland train whipping through on its journey from Melbourne to Adelaide.

So, the TL;DR is that sometimes you really just have to make the effort, get off the beaten track, and get out and do things that have been niggling away at the back of your mind. The pay off is so utterly worth it.