This post started out as a reply to Jay’s post about the keeping/discarding of useless yet sentimental favourites around the house. In this case, stuffed animals. So I’ll start with my uselessly sentimental favourites for your entertainment. However, as I was camera in hand I shall move on from there to other notable news items from Chez Deeleea.
The Boys 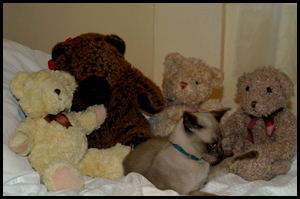 Now, whereas Jay has what amounts to a stuffed menagerie I have a stuffed sleuth. [ed. yes, the collective noun for bears is sleuth… go figure]. Having had other animals over the years I have dilligently reduced the excess to these 4. From Left to Right.
Howard – so named for the bear in [mumble, mumble] Sleepless in Seattle (1993). He was gift from ‘Sis for my birthday and, dahling, as nothing but the best will do for her big Sis he hails from none other than Country Road(don’t click the link, it’s a really rubbish site).
Harrod – so named for his point of origin. He’s one of the special edition annual Christmas Bears and is for the year 1992. He too was a gift; one from my then employer. They had a family tradition of purchasing Christmas bears with the year of their children’s births. 1992 was the year I worked for them. He’s a sentimental favourite and looks like he does (which is far from his original condition) as there was a time when (yes, even as an adult) I cuddled him to get to sleep.
Hucklebeary – So named because that’s the name he came with. A gift from my mother for a birthday. She’s as helpless as me when it comes to bears. I’m much more controlled now but there was a time when a cute one like this was to be considered irresistible.
Brighton – As above.
Chino – As you can see, not a bear [ed. nor is he stuffed judging by the scratches on your arm] but not to be outdone by a bunch of soft toys – he has to be in on the action. These days he takes Harrod’s place as soporific company. And yep, he sleeps all night tucked in under my chin. Sad but true.
So, are any of them dispensable? No. They’ve come from as far afield as London and Auckland. They’re here to stay…
Upgrade
I am currently congratulating myself on having upgraded my Movable Type installation from version 3.2 to Version 3.34. It went well. No small achievement considering this is the 2nd upgrade I’ve done and it isn’t something one does lightly. But it all went well until I tried to install plug ins… Let’s not talk about that side of things…

You’ve Got Mail
Some time ago I did a little favour for Gem over at Snark Attack. Just a couple of favicons to spice up her sites. I’d forgotten that she’d promised a treat to say thanks until I finally got up to the P.O .today to clear my mail and found these!! Thanks Babe! Have heard about the Suskind and hadn’t got near it so I’m looking forward to it! What a great surprise, and most welcome.
So you lot, if you want little bits and pieces like favicons and things just sing out… Clearly, I’ll work for presents…
Published

Some time ago I did some editing work for a project that has been going on for a while at work. It’s the publication of a celebratory book about our church over it’s 25 year history (actually it now has a 27 year history… we just didn’t exactly rush out the book). I was responsible for tweaking the submissions from the various members who contributed articles and as a consequence have a fairly prominent credit in what is a beautiful coffee table volume. I’m also lucky enough to have had a number of my photos published in it as well (as illustrated). It was great fun to be a part of the project and to have such a lasting reminder of the early years in my tenure here.
One for Free 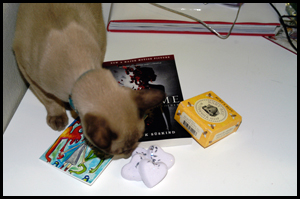